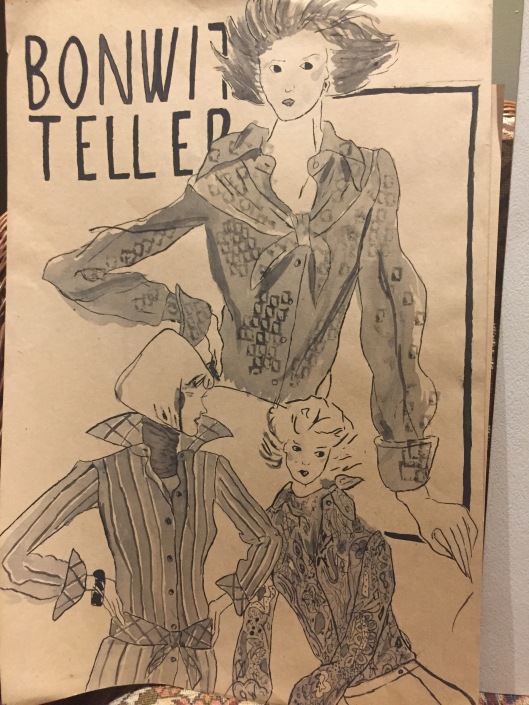 I’ve heard that creative people are creative in multiple ways and so we should not be surprised to find that Joni Mitchell and Bob Dylan also paint pictures. But when you are struggling to be the artist you imagine yourself to be, like me, writing a memoir and telling a story I very much want to share, finding that I have hidden talents is confirmational.

In cleaning out an old trunk in the spare bedroom I came upon this drawing I made when I was sixteen. I’d forgotten that I once believed myself capable of such creations because honestly, right now, I can barely play Pictionary. But possibly if I renewed that notion that I can draw and I put my mind to it, I might win a few rounds.

This sketch is the result of the one drawing class I had in high school, with Robin Burkhardt, who insisted it was about taking the time and seeing clearly. And voila, she was kind of correct! This Bonwit Teller department store ad is a direct mimic of one I saw in the newspaper at the time. The coloring-outside-the-lines I allow occasionally suggests a little artsyness!

Believing in yourself is half the battle.

3 thoughts on “Believing in yourself is half the battle”