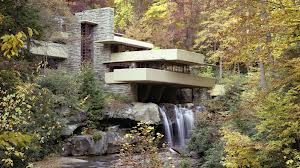 Yesterday in writing class, eleventh grade AP level that is, the students got distracted after a TED talk we watched of Malcolm Gladwell discussing happiness and spaghetti sauce, by the animated scene of a wrecking ball smashing in Frank Lloyd Wright’s Falling Water. The spaghetti sauce talk was engaging, but this other scene was pretty cool too. Our teacher, who was beginning a discussion on the arguments Gladwell uses to make his point, didn’t realize he’d left the  computer on and that what amounted to commercials were running after the TED talk. The kids were too interested in the wrecking ball scene to hear the teacher’s introduction to the discussion and he had to stop to find out what the ruckus was about. One of the students explained that behind the teacher’s back were pictures of a ‘building being destroyed’.

“That’s no building”, I told him, “that is Frank Lloyd Wright’s Falling Water”.

I have been to Falling Water and it is magnificent. It is a place I think about often. Really. It made an impression on me as a monument to following your intuition, and of the power of creative thinking, and of the ability to integrate nature and man’s ideas and needs and physical structures, and so many other things. I bought a lily pad shaped soap dish there that I use every day when I wash my face. So to see a wrecking ball, even an animated one, tear it all down was provocative. I was interested in the scene, too!

My student friend sitting next to me had no idea what Falling Water was, and to him it was just a building and it was just fun to see it brought down by a wrecking ball. But it served to show me the funny way life is. How over time I have gathered a collection of experiences that inform me as an inhabitant of our society in a completely different way than this young person, here only a few years, relatively speaking, since I am 55 and he is 16. So much has passed before my eyes and heart since I was 16 that I have gathered a perspective on life that he has yet to gain.

His view of the world is different and fresh and wonderful, and so is mine.

Today I got an email from my English teacher asking if I could come in next Tuesday to help in the classroom. It’s midterms and the kids requested me be there during the essay portion of their test. What, you say, help out during the test? Yes. This is precisely what the trained educator in the room and I dreamed of, building enough trust with the kids so they might do something like this…seek out help.

My teacher is so clever as to recognize the value in teaching kids how to take a test by having me present. I sit on the sidelines and students step up one at a time in the middle of writing an essay, and as the spirit moves them, kibitz quietly for a moment or two. I don’t have any answers. Honestly, at the AP level I barely know what the literature is that we are talking about. But I do know how to think, and how to organize and how to help guide a logical progression of ideas. And that’s what we talk about. As a matter of fact, the idea that I do not necessarily read the works we are studying, allows an ignorance the teacher can never get back. She’s read it all, and read it all a lot. So, if kids are not clear enough in their writing to inform me, the average individual, of what their point is by way of specific examples that prove a point, they are not communicating effectively. So, in this way, the less I know about Dante’s Inferno, the better.

I do what I can, and apparently my ignorance is quite helpful.

Every day kids move invisibly a tiny step closer to adulthood. So you never know what you’re going to get. You never know if today is the day they suddenly like spinach after years of saying no to it. You cannot tell by just looking, so it is a little dangerous to think the kid you are talking to today is the same kid you were talking to yesterday. It just might not be.

So at school I have to keep open the possibility that one of my students, instead of flipping her hair and turning on her heel in exit, may instead stop to talk about our work in class together, contributing even more to her own learning. I need to remain ready for that. Teenagers are on the brink of adulthood so some days you get an Elmo tee-shirt wearing kid discussing Faulkner and some days you get a fashionable looking young adult playing classroom pranks.

You just never know. Today could be the day a kid steps a little closer to her future, and if it is, I’d like to be there to cheer her on.

The high school English teacher I work with said to me today, “Let’s go where the learners are”, meaning we should follow the kids in the classroom that show their interest in learning, and then try to teach them whatever it is they are able to receive. This creates a culture in the classroom, of learning.

I know this might sound complicated but really I think it is what we do as parents all the time. When my toddler brings me a book, I see that it is time to read. He is showing me that he is ready to learn about reading even if it is only to hear the story. Do it enough times and more things, things we are not even counting on, are being learned as well. Things like our ability to be close, or how stories are composed, or that Dr. Seuss is an artist and an author, or that sometimes parents fall asleep reading books, or that sentences can be constructed lots of different ways. Frequently my piano students are eager to show me what they have learned over the intervening week….ripe to learn more. “Show me,” I say, and I let them lead the learning right off the bat.

There is little way for us to know for sure what our kids learn when we attempt to teach them, so why worry about it. Let’s just go where the learners are, and offer what we have with the hope they will benefit.
All of this creates a culture of learning and of caring about kids, teaching our children to value and embrace our authority.