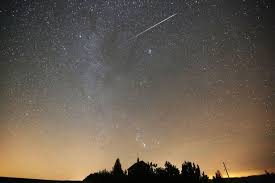 What great good luck do I have that I may go to the state park, late, and lay down in the bed of the truck to watch the Perseids meteor shower? We had pillows and warm breezes and barely any light in our eyes, and so the stars came into focus as we settled ourselves in.

Every August, when our grown daughter inspires us to step into the dark late at night, it reminds me of walking out to the end of the lane in Arden on a starry evening and happening upon a meteor shower. Back then we were just kids killing time in a lonely place, steeped in nature, free to wander. The end of the lane promised a show as my older sister, who knew the constellations, pointed with authority upwards into our own personal sky. Sometimes while debating which particular stars she wanted me to see, we’d be charmed by a spark that painted a fleeting arc across the scene.  Before you knew it we spotted another and then several more. It made it clear that the world is large and we are just specks. Shooting stars, any stars, are just part of the landscape. Yet, at the same time they are so special that I imagined them bestowing us with sparkling good luck.

And they did. Since I left Arden, a place that I loved, my life has only improved, no doubt aided by the power bestowed on me by the energy inherent in that happenstance dust.

Unlike in Arden though, this week our trip to the state park is deliberate and we are impatient as we wait and hope for the next shooting star, aware now that meteor showers are predictable. We were not disappointed when all three of us saw a fireball cross the sky in a long screaming streak that seemed to never end.

Some kind of good luck is on the way, I think to myself.

I gave a lot of people exactly the same gift for Christmas this year. It is the video, “I Am” made by the director of all those silly Jim Carrey movies like Liar, Liar, and Ace Ventura, Tom Shadyac. He is a wealthy Hollywood guy who was riding through the California hills on his bike one day, apparently a day that he wasn’t in his fancy private jet, and fell and hit his head. He came so close to death that when it turned out happily that he did not die he felt compelled to seek the answers to more serious questions than what new moneymaker can I crank out next.

Given his prominence he can easily access expert minds, so he interviews scholars and poets, scientists and philosophers, to ask the question, “What is wrong with society and how can we fix it?”. Being a director of funny movies he does this in an entertaining way so it doesn’t feel like the serious documentary that it is. He discovers a world of unspoken communications between people that we barely acknowledge. You know, intuition and hunches, and the creepy feelings you get that someone is in the dark watching you when they, in fact, actually are. He discovers that we know more than we let ourselves realize, and he gives me some context for the notion that what goes around comes around. You wonder how all those deer know when to turn and run at the very same moment, or how all those birds in the sky or fish in the sea know how to move en mass so beautifully. He convincingly shows us how powerful this ability to recognize ourselves as part of a collective whole is, and he identifies truths such as that the innate nature of man seems to be one of cooperation rather than competition, using experts who cite ancient cultures and modern day examples. He shows how animals cooperate rather than compete, after the barest necessities are met and concludes that we humans should do the same.

And in the end he decides that he is part of the problem of the world in that he takes, uses and wastes far more of its resources than he personally needs while others suffer for lack of these same things. He decides to sell his fancy lifestyle and adopt a more prudent one. He shows the viewer how we are all connected at an unspoken level that ultimately supports us all. He shows the power of the individual to make a difference in the world.

The folks at the bookstore where I bought the DVD told me that few people buy just one copy of this movie, that when they buy it they often buy multiples! I have to say, that is exactly how I felt, so I, too, bought many. I love the notion that we are all connected and that it matters what we do at an individual level every single day.